I’ve never been interested in watching the Kandy Esala Perahara. That is, I didn’t take the time to sit in front of the Tele and watch the procession, but I always told my parents, that we should go and watch it live. My father, especially said, “If we are going to watch the Perahara we should get good seats, and good seats are expensive, we are better off watching at home, then you get to listen to the commentary”. Thus, it was quite evident that I, seeing the Perahara with my parents was a very unlikely outcome. 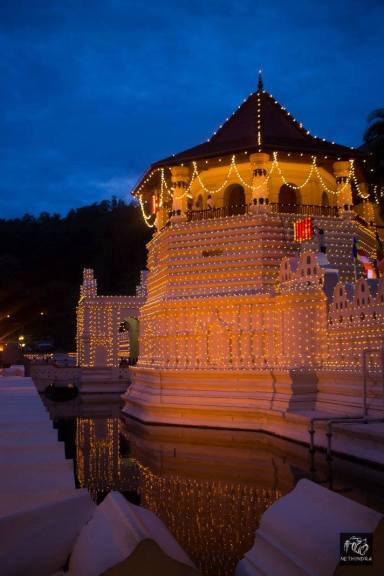 The Sri Dalada Maligawa, Temple of the Sacred Tooth Relick

In 2014, after I took up Photography as a hobby, a colleague of mine said that he could get me a media pass to photograph the Perahara! Lo-and-behold I was seated right in front of the octagonal Patthirippuwa on the penultimate day of the Perahara. It was an amazing experience!!

A Tusker representing the Maligawa Perahara, worshiping the Temple on it way to be dressed

But today, I’m writing to you about the second time I went to see the Perahara, this time on the final day. And No! I wasn’t a spectator, I was able to experience firsthand the traditions and rituals that take part behind the scene also traverse the city on rout with the procession.

On the last day of the Esala Perahara, the Kandy town is a buzz with activity. The pavements are crowded as there are many of the faith, who camp by the side of the Perahara rout to make sure they get a good vantage point. There are various vendors selling everything from sheets of polyphone to toys to street food (mostly Wade). Then there are those bring boxes of food and drink to donate to the waiting spectators. Oh, and there are additional security check points! As the sun sets behind the hill tops, and the night draws near, the commotion intensifies. Many people trying to get to their seats to see the Perahara, and many more trying to get out of town before the roads are closed off for traffic. No matter how noisy it is, you can still here the changing of Pirith from the Maligawa. And suddenly, as the street lights slowly turn on, calmness set upon the city, and all you can here is the chanting of Pirith. A huge ‘bang’ breaks the silence, an indication that the sacred tooth relic has been removed from its resting place inside the Maligawa. There are no cheers of excitement to be seen, but when you are there, amidst the crowd, you get a surreal feeling, a kind of calm excitement that engulfs you as you await the start of the Perahara.

The Maligawa from across the Kandy Lake

Meanwhile, as the auspicious time approaches, the excitement that will shortly be felt on the streets, blossoms inside the holy grounds of the Maligawa and the surrounding Devala. The last day of the Esala Perahara is a much awaited spectacle. The Custodians (Nilame), Dancers, Drummers and Torch bearers, many who have inherited a place in the Perahara through generations, put on their finest clothes and prepare in much earnest, as they uphold the legacy of their respective families. As per tradition, the Chief Priest of each Devalaya, bless the Dancers and Drummers before they begin to prepare themselves. The Elephants who represent each Devalaya are also brought before the Chief Priest to receive blessings. Those who take part in the Perahara also have to cleanse themselves throughout the duration of the Perahara. During this period of around a month, the participants refrain from consuming meat, alcohol, etc…

Nadungamuwa Raja being prepped with a special harness

Inside the Maligawa, “Nadungamuwa Raja” the Ceremonial Tusker, the most magnificent Elephant I have ever seen, is prepped with special gear to safely hold in place the casket which will house the relicanery containing the sacred tooth relic of the Lord Buddha. When the auspicious time arrives, the Diyawadana Nilame, chief lay custodian of the Temple of the Tooth Relic, removes the sacred relic from its resting place in the Maligawa and brings it to the place where the Raja was dressed. The sound of traditional drums and horns echoes through the halls of the temple, as the mini procession cuts through the gathering of temple officials, invitees and members of the media. A muffled “bang” is heard in the background.

Diyawadana Nilame, chief lay custodian of the Temple of the Sacred Tooth Relic, in procession with the casket containing the Sacred Relic

The Perahara begins at an auspicious time. Led by the Whip-crackers and Fireball acrobats the Perahara slowly begins is tour around the Kandy City. Along with the sound created by the cracking of whips, you hear a faint metallic sound. This is because the spectators throw coins onto the street as the Whip-crackers pass by. You will see someone assigned with the task of collecting these coins/donations running about stopping and picking up coins. The Whip-crackers are positioned at the front of the Perahara, because they signal that the Perahara is approaching. This may seem redundant because now-a-days the Perahara gets a Police escort. Today, the streets are lit with street lamps, and flood lights placed at prime viewing points. But you will still see a series of Torch Bearers accompanying the Perahara washing the procession a calm yellow glow. The smell of kerosene oil, mixed with the smell of Copra (the dried Coconut kernel) and the pungent smell of Elephant dung add to the ambiance of the Perahara scene.

The Perahara consists of five sections. The Maligawa Perahara followed by the processions of the four Devala dedicated to the guardian gods Natha, Vishnu, Katharagama and the goddess Pattini. Kandyan Dancers and traditional Drummers are found in each section, and of course there are many Elephants dressed in finely embroidered dresses embedded with flashing LED lights! You will also be able to see a spectrum of different of traditional Sri Lankan dances, like the ‘Lee Keli Dance, ‘Pathuru Dances’ (similar to ‘Lee Keli’ but with a wooden clapper), ‘Vewal Dance’ (I don’t know how exactly to explain this, you just have to see it!), ‘Ves Dance’ (Traditional Kandyan Dance), ‘Nai Adi Dance’ (similar to Ves Dance, sans the head dress known as the ‘Ves Thatutuwa’, which gives the dancers the ability to do flips and acrobatic maneuvers) and the ‘Raban Dance’ (dancers who balance one or more spinning ‘Raban’; a small traditional drum similar to a Tambourine) You will notice the different drum beats, the changes in tempo, and the distinctive tunes differentiating each devala procession from one another. Also there are a few items that are specific to each section, especially in the Devala processions. The Katharagama devalaya procession includes Kavadi Dancers and Peacock Dancers. The Pattini devalaya procession is the only one to feature female dancers who perform the ‘Kulu Dance’ and ‘Kala dance’ as well as the ‘Kohomba Kale’ dancers who balance a tall ornamental head dress during their performance. 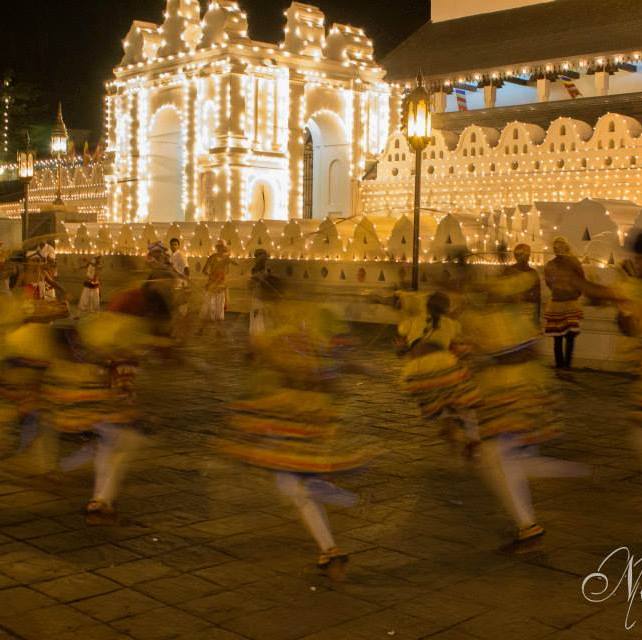 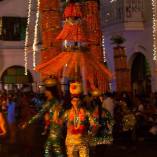 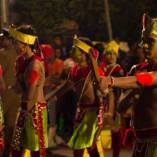 Once the entire Perahara is over, the Sacred Tooth Relic is returned to its rightful place within the Maligawa, the sound of Cannonball fire cuts through the midnight silence. The streets begin to empty as spectator retreat to their homes. But a few do remain, to witness a mini procession. This is done by the four Devala, where the relics of each Devalaya are taken around the city along a shorter rout compared to that of the normal Perahara. It’s mostly consists of the Tuskers who carry each relic accompanies by Drummers and a few Dancers. Once completed the relics of Devala are returned to their resting place at each Devalaya.

The Tusker of the Pattini Devalaya waiting, whilst the Relic upon it’s back are removed in ritualistic manner

Things to look out for if you are in Kandy during the Perahara season;

You can find more photographs here:

Elephants at the Esala Perahara 2015

“It is like a lighted torch whose flame can be distributed to ever so many other torches which people may bring along; and therewith they will cook food and dispel darkness, while the original torch itself remains burning ever the same. It is even so with the bliss of the Way.”
Gautama Buddha
[Sutra of 42 Sections]