As a kid who grew up in Colombo, going to the Zoo was definitely a highlight! I used to love going to the zoo and vividly remember being taken to the Dehiwela Zoo as part of the annual Grade 5 class trip. We spent the day roaming around the Zoo learning about the different animals. Of course at that age we were simply fascinated by seeing wild animals in real life and didn’t pay much attention to what was being taught to us! The day ended with the Elephant show followed by the Seal show.At that young age we had no idea of how depressing it must be for these animals to be caged up and put on display.

Over the past few years there have been numerous stories on the media that brought to light how animals at the Zoo are being ill-treated. This gave rise to a social uprising which saw non-governmental organizations and social groups coming forward to help protect these animals.Animal lovers around the country joined in the movement for improving the living standards of animals that belong to the Zoo.

The concept of an “Open-Range Zoo” is quite common in countries like Australia, and New Zealand while a slightly different concept known as a “Game Park” is popular in Africa. Both Open-Range Zoos and Game Parks allow animals to roam freely, the major difference is that the Game parks allow controlled hunting for sport. In case you didn’t know, Monarto Zoo in South Austrailia is the largest open-range zoo in the world and is home to more than 500 animals and 50 exotic and native mammals, birds and reptiles.

Development of an Open-Range Zoo in Sri Lanka has been on the cards since the early 2000’s. As usual there were many impediments that halted the progress of the project; finally the construction restarted in 2008 and the Pinnawala Zoo was opened to the general public in April 2015. Situated in the vicinity of the Pinnawala Elephant Orphanage, this 44 acre land has been designed and developed in such a way that it preserves the natural beauty of the land. Though Sri Lanka is merely a dot on the world map, it is rich in bio diversity. Thus, the focus of the Zoo is to provide habitats for endemic species while accommodating a few foreign species as well.To achieve this, the zoo has two main sections the “Sri Lankan” section and the “World” section. Built to international standards, the zoo also offers dining venues and areas to relax to those visiting; providing adequate facilities for the Animals is of course the top priority. 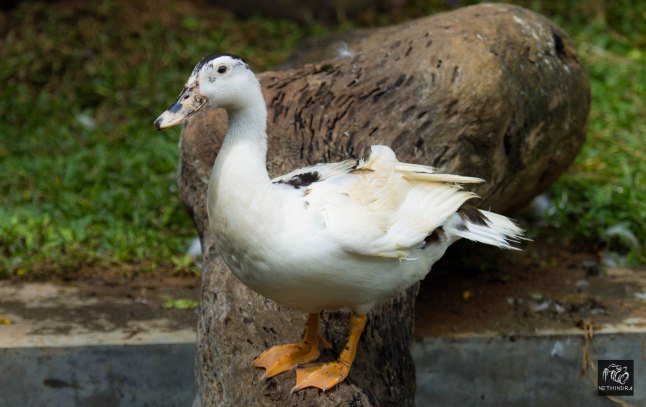 When the Zoo was opened, it received a lot criticism for not having much to see. I experienced the same during our first visit. The landscapes were done beautifully, but, the enclosures were spread out and only a few enclosures were active. This meant that you had to do a lot of walking inside the zoo, possibly the main frustration endured by the visitors during the time.

The special free roaming section inhabited by the Sri Lankan Leopard is easily the most sought after section on the premises. I’m yet to see a Leopard in the wild, so you can imagine how excited I was!!There are two viewing areas, Yala point and Wilpattu point, from which you can look into the enclosure. Yala point is built like an underground bunker with glass windows that peer into the enclosure at eye level. The interior is splattered with an assortment of information on Leopards, their lifestyle and habitat. We camped at the window for some time but didn’t see any Leopards. Then we moved to Wilpattu point where we climbed on to the upper deck from where we were finally able to get a glimpse of the Leopards sitting under a tree. We watched them for almost 45 minutes, but it seemed as if they were enjoying their afternoon nap time! According to the website of the Department of National Zoological Gardens, there are 7 Leopards at the Pinnawala Zoo.

A Deer enclosure that mimics their natural environment by design puts on display a collection of Deer that live in Sri Lanka. What’s unique about this is the fact that different varieties of Deer like the Sambur, Spotted Deer, Barking Deer, and Hog Deer share this common space.

During our first visit, the Crocodile enclosure and Bear enclose were under construction. The Bear enclosure is currently in the making but the Crocodile Enclosure was opened recently. The Pet Area of the Zoo is home to more common animals such as Mouse Deer, Star Tortoises, Black Tortoises, Flap shell Turtles, Ducks, Muscovy Ducks, Turkey, Porcupines, Rabbits, Wild Boars, Brow Fish Owls, Guinea Fowls, and White Bellied Sea Eagles.

The Pinnawala Zoo is open from 8:30 AM to 5:30 PM daily. Ticket prices are similar to that of the Elephant Orphanage, which is LKR 100 for adults and LKR 30 for children between the ages of 3-12. The ticketing system at the zoo is pretty cool! It’s not THE latest technology, but it’s a step in the right direction! If you’re planning on spending a day out with friends or family in Pinnawala, I recommend visiting the Elephant Orphanage in the morning and stopping over at the Zoo in the afternoon.

“People go to the zoo and they like the lion because it’s scary. And the bear because it’s intense, but the monkey makes people laugh.”
-Lorne Michaels