After spending a majority of the previous day travelling from Kandy to Katharagama, I wasn’t pleased with the prospect of waking at 4.00 a.m.the next morning. But none the less, on this cold October morning, I woke up excited for the main activity planned for the day! I packed my camera equipment and headed off to Tissamaharama where we rendezvoused with our Guide. From Tissa we drove our Safari jeep to the main entrance of the Yala National Park.

I remember the first time I visited Yala. It was during an annual company excursion. I remember it being a lot of fun because the colleagues who were in my group were all wildlife enthusiasts and we engaged in a very interesting and informative discussion with our Guide that included many stories based on his personal experiences. I also remember Yala being very dry, warm and dusty! I spent hours cleaning my camera after we got back to the Hotel. Sadly the only animals we were able to see were Wild Boars, lot of Peacocks,a couple of herds of Elephants and Deer, Crocodiles and a variety of Birds. 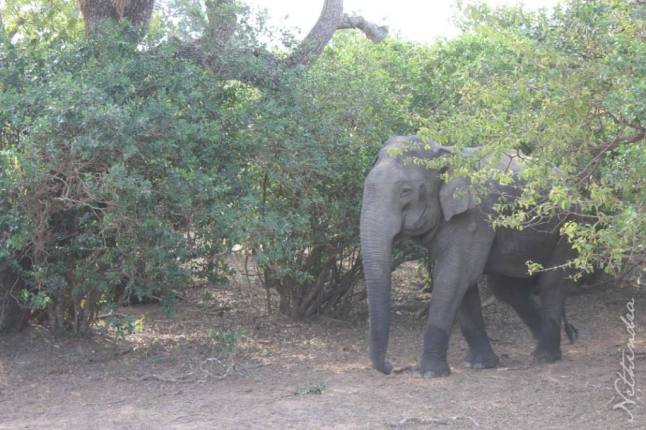 The Yala National Park, situated in the south east region of the island, is the most visited national park in Sri Lanka. Yala is also the 2nd largest national park in Sri Lanka covering an area of roughly 980 square kilometers. The park consists of 5 blocks, out of which 2 are open to public from 6:00 AM to 4:00 PM every day. During times of extreme drought the park may be closed for an extended period of time. On route to the main entrance of the park, you need to purchase tickets from the wild life conservation office. You can also hire a Guide from this office. When there are a lot of Safari jeeps entering the park you may have to share a Guide with another safari group. If you’re lucky the Guide will ride shotgun in your jeep and you will be able to strike up a conversation with him. 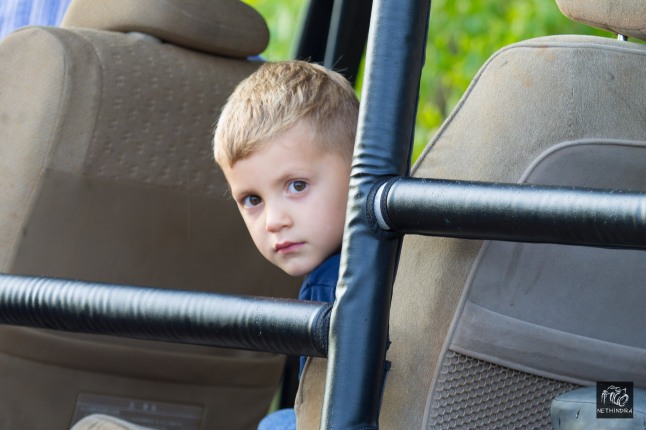 A safari in Yala is a must for anyone travelling to the south east of Sri Lanka. Many locals and foreign tourists, go to the southeast for the sole purpose of going on Safari. Most of the locals who travel regularly are the wildlife photographers who spend days on end patiently waiting for the perfect shot! If you have the time, I suggest a morning safari and an evening safari. This is the best time to catch a glimpse of some of the rare animals in Yala. Based on my personal experience I’ve had more luck during mornings than in evenings. The best time of year to visit Yala is between February and July when the water availability in the park is low, which brings animals into the open in search of water.

Similar to most tourist destinations in Sri Lanka, there are many service providers who build a business around the attractions. Thus, there are many establishments that provide Safari Jeeps. I recommend that you talk to a few friends or acquaintances that have gone on Safari. Based on their input you can decide on a Safari service provider. Of course you can also arrange a Safari trip via the hotel you are staying. All of the safari jeep drivers and guides are well connected! Whenever someone spots something interesting, they pass the messages to the others in the park. Word travels fast and suddenly there are a lot of jeeps trying to access the same area causing a traffic jam much worse than the rush hour traffic in Colombo. Along with traffic there is a lot of commotion, which, unfortunately, drive away the animals.

They say that if the first animal you spot on your trip is a Fox, you will have a good trip! That is, you will be lucky enough to spot a lot of other animals as well. Of course I was skeptic when I heard this at first, but, I did spot a Fox during the morning visit after which I was able to spot another rare animal. 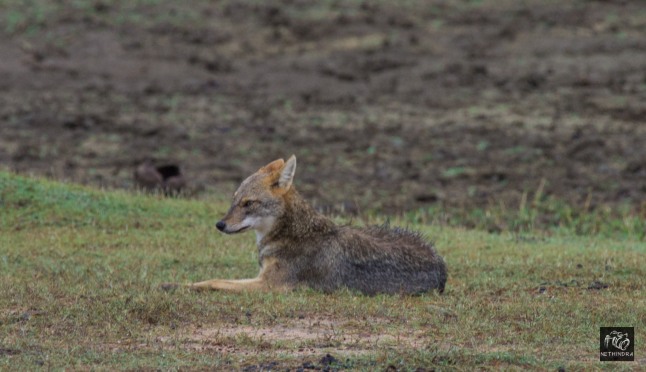 About 15 minutes after we spotted the Fox, the Guide got a call with some information on a sighting. I could tell that he was excited when he turned to us and said that he got news of a Bear! Our guide instructed me to keep the camera at the ready as we approached the place where the Bear was spotted. There were about 10 jeeps already crammed into a small space, with excited tourists and locals peering out of the windows to try to catch a glimpse of the Bear. I was the first to spot the Bear in our jeep! He was about 30 meters ahead of us by the side of the road, but he quickly crept into the undergrowth and disappeared. You could feel the excitement drain out of the onlookers as they lost sight of the animal. The jeeps began to disperse, but our jeep as well as two jeeps behind us moved forward and stopped near a clearing by the side of the road. The Guide suggested that we wait a little, and we did. A few minutes passed, and to my surprise, the bear appeared from one end of the clearing and walked the entire length of the open field. I could hardly believe my luck, he was literally less than 20 meters away from me! I began taking pictures in burst mode like a solider firing a Kalashnikov! 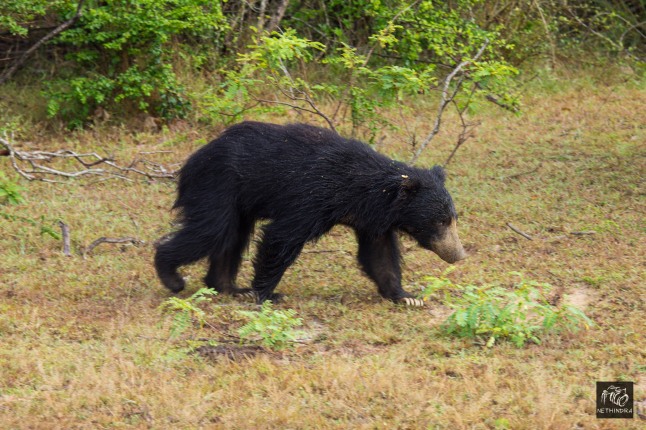 The Sri Lankan Sloth Bear is a sub species of the Sloth Bear covered in long black shaggy fur. This endemic species is about 3 feet tall and 6 feet long and an adult male can weigh up to 140 kg. Sighting a Sloth Bear is quite rare in Yala. The highest concentrations of Sloth Bears have been recorded in Wasgamuwa National Park.

Surprisingly, we didn’t run into a lot of elephants on our trip. Elephant sightings are quite common in Yala, and you will see at least one of them. The Sri Lankan Elephant is the largest of the three recognized subspecies of Asian Elephants. Sri Lanka is known to have the highest density of Elephants in Asia.Wild Elephants are quite dangerous, so keep your wits about you when you are in close vicinity of one.  Be extra cautious if you cross paths with an Elephant in heat, a single male Elephant (“ThaniAliya”), or a Trio (commonly known as a “Thunpathraana” where a baby Elephant is accompanied by it’s mother and another female Elephant.)

As you roam around the park, you will hear the call of the Peacock. If you’re lucky you will witness the male peacock’s extravagant courtship dance. During the dance the peacock will rattle his iridescent bluish green feathers to attract the attention of a potential mate.

We came across a herd of Sri Lankan Axis Deer. Commonly known as the Spotted Deer, they are easily identified by the white spots on their backs. The most common of all deer species in Sri Lankan, they find cover in the jungles and only come out in the open to feed on the grass when they feel safe.Male deer engage in antler to antler combat after which the winner becomes the king of the herd and gains mating rights. 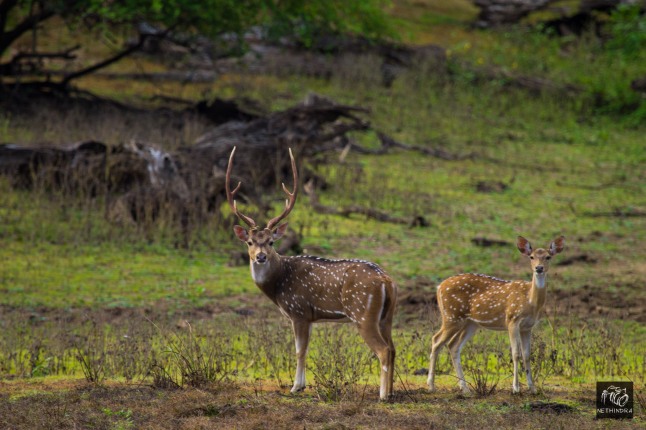 When passing by watering holes you will be able to spot a few Crocodiles basking in the sunlight. Wild Boars and Wild Buffalos are also quite common. An experienced Guide will spot and point out an array of indigenous and migrant birds as you drive around the park.Unfortunately, I am yet to spot a Leopard in Yala. 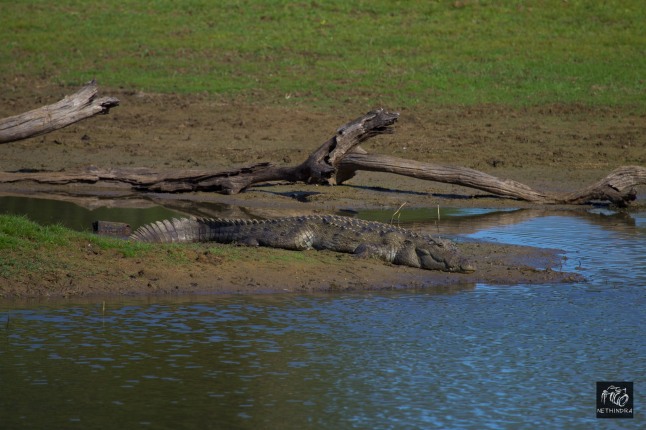 There are a few locations where you are allowed to get out of the Safari Jeep to stretch your legs and have a snack. I’ve been to two such places, one being the stream that separates Zone 1 from Zone 2. The other place is called Patanangala which is on the beach. A Tsunami memorial has been built in this location reminding the visitors of the devastation it caused and the lives lost on that fateful day.

Bear in mind that Yala is a national treasure and we need to contribute towards preserving it for the future generations.

“If there were one more thing I could do, it would be to go on safari once again.”
– Isak Dinesen