December 26th 2004, a day forever etched in our memories as the day the sea swallowed the coastline. The amount of destruction caused by the rampaging sea was a phenomenon that was beyond comprehension. I remember sitting at home, watching the Boxing Day Cricket match between Sri Lanka and New Zealand when the breaking news interrupted the live telecast; Sri Lanka was hit by a devastating Tsunami.

According to the “Great Chronicle”, popularly referred to as the Mahavamsa, a similar phenomenon had occurred during the reign of King Kelani Tissa. The ancient scripture mentions that King Kelani Tissa sentenced a monk to death by immersing him in a cauldron of oil. This act of cruelty angered the gods who unleashed their wrath by making the sea flow inland submerging Kelaniya. Soothsayers, who advised the king during times of distress, asked his royal highness to sacrifice his daughter to the sea. Thus, the King’s daughter Devi, was cast in to the sea in a beautifully decorated Golden vessel.

The vessel with Princess Devi aboard washed ashore on to the beach near the area which is today known as Pottuvil. The Princess later became the main consort of King Kavan Tissa of Ruhuna, Vihara Mahadevi. She was the mother of King Dutugamunu and Saddhatissa.

King Kavan Tissa built the Muhudu Maha Vihara on the site where Princess Devi’s boat washed ashore. The temple complex originally built about 2000 years ago consists of Stupas, a Seema Malakaya, Avasa Geya and a number of stone carved statues of Lord Buddha. Though neglected until quite recently, the complex has now been given a facelift with the assistance of the Sri Lanka Army who have built a new Dagoba adjoining the broad white sandy beach.

To reach the Muhudu Maha Vihara, the quickest way is via the Colombo – Batticoaloa highway (A4). When you reach Pottuvil junction, turn right towards Arugam Bay along the A 374. After about 3 kilometers down this road, turn left on to Beach Road and turn right to the Market Road and proceed to the temple. 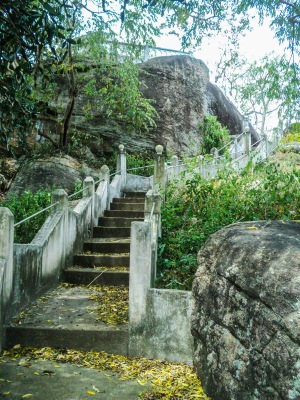 It is said that King Kavantissa built the “Magul Maha Vihara” at the location where his marriage to Viharamahadeiv took place; a union that would become a pivotal event in our county’s history. This is because their two sons played a major role in unifying the country and reestablishing Buddhism to its rightful glory. The temple is situated in Lahugala, on the Northern edge of the Lahugala National Park about 22 kilometers away from the Siyambalanduwa town and nearly 11 kilometers before the Pottuvil town. The site, a popular tourist attraction, is protected due to it archeological significance.

The place where the Wedding Ceremony took place

Amongst the vast amount of ruins of the ancient temple seen at the complex, the image house, the Bodhi Tree and the Stupa are all in a good state of preservation. The main gate, a small shrine room and a fort like wall that surrounds the complex can also be seen at the site. If you take a closer look at the Moonstone at the entrance to the small shrine room, you will notice that it has a unique feature – mahouts are carved on the backs of Elephants. 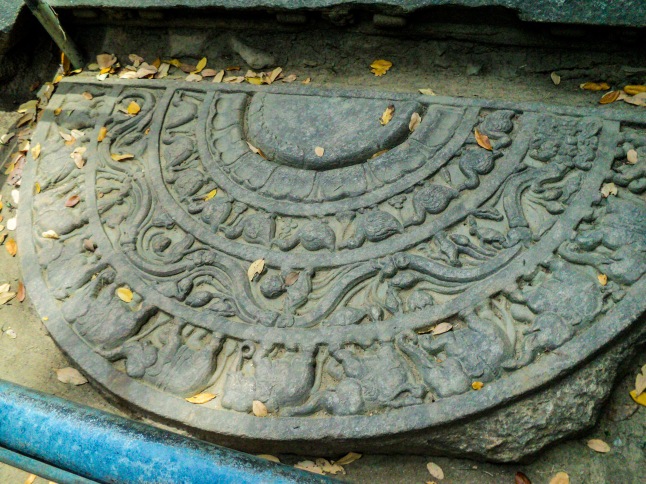 The Moonstone at the entrance to the small shrine room

Sitting on a high hillock, surrounded by three staircases that lead up to it, is the Stupa. At the top of each staircase are stone carved Lions that guard the Stupa. The Stupa is located about 100 meters away from the main archeological site; to reach the Vihara one must cross a Lotus filled pond. The entire complex that extends over an area of more than 10, 000 hectares is surrounded by the Lahugala Nation Park; an important habitat for animals such at Elephants, Sambars, Deers, Leopards and many endemic species of Birds. 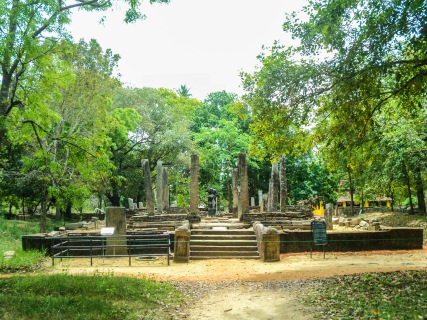 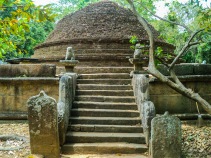 On the Colombo – Batticaloa Highway, before reaching Lahugala, there is a road to the right at the 305th kilometer post known as Neelagiri Temple Road. This road leads to another archeologically significant site, the Neelagiri Seya, the largest Buddhist Stupa in the Easter Province. In its present state, this huge Stupa has a circumference of 600 feet (182 meters) and a height of 72 feet (22 meters). The Stupa is believed to have been built by King Kawantissa (3rd Century BC) or King Bhatikabaya (20 BC-9 AC) and has been renovated in the 7th Century. Restoration work on the Stupa carried out during 1979 to 1984 was abandoned due to civil unrest. However, restoration work was resumed in 2011 and is still ongoing. 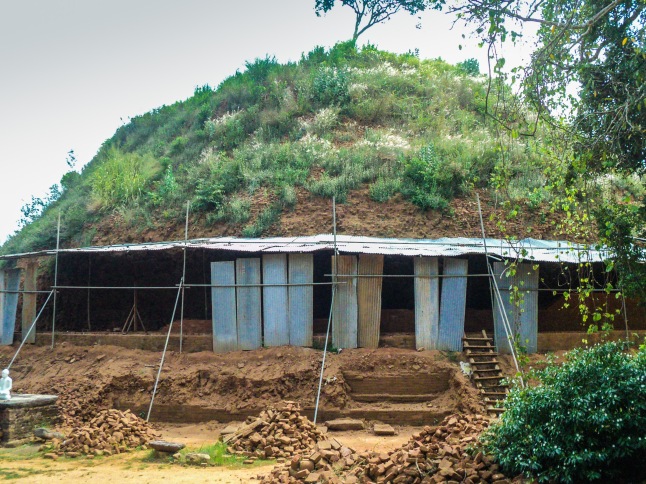 Yet another archeologically important Stupa that you come across on the A4 Highway is the Lahugala Kota Vehera. As the name implies, the vehera has been constructed in the “Kota Vehera” style of architecture. These Stupas are unique as they are much shorter in stature compared to the Stupas that we are familiar with. The Lahugala Kota Vehera is one of four Kota Veheras found in Sri Lanka. The Stupa is built on a hillock by the side of the main road and can be easily spotted from the main road.