After a somewhat of a lame safety briefing I started to make my way along a narrow foot path towards the bank of the Kelani River. It was roughly 9 am on a gloomy Monday morning. We spent the previous two days engaging in various outbound training activities, and it was finally time to go White Water Rafting. The team bonded over the past two days; working together, having fun and getting to know the person behind the face that we see everyday at office. One could taste the excitement and tension in the air. We were looking forward to an awesome experience.

Geared up in safety vests, helmets, and paddle in hand, we continue down the winding foot path as the rain beat down on us. The closer we got to the river, the sound of the rain drops hitting our helmets and vests got muffled by the roar of the raging river. It was at this moment, that it struck me. I’m going white water rafting!!! I don’t know how to swim!!! I heard my mom’s voice in my head, telling me the dangers of rafting. I took a moment to clear my mind, a moment to think. We wouldn’t do this if it was that dangerous, would we? take such a big risk? My thought process was interrupted when my team mate, put his arm around my shoulder and started to talk to me. There was no turning back now, no one was backing down, everyone was anxious to get on the water.

We had been divided into team prior to leaving camp. My team comprised of SuNa, LaNa, HaPe, HiTi, BuRa, and our instructor FaFa. It was our turn to man the raft, and man it we did, FaFa, SuNa and I took up oars on the port side, while a man from the rafting company, LaNa and HaPe sat down on the starboard side. HiTi, who was quite enthusiastic wanted to paddle, but, the navigator said that she should stay in the middle and switch with someone when we go further down stream where the rapids were smaller. That decision to let the guys paddle and leave the girls, HiTi and BuRa in the middle to balance our raft, was a critical decision that decided our fate in events that were soon to unfold.

We pushed off, the navigator ran through the paddling instructions one last time, as he navigated us slightly up stream towards a shallow bay. A few anxious moments passed. The river was rough, it was loud and very angry!!! There was no “white water”, it was all brown and muddy! Being a bunch of software engineers, nerds, noobs when it comes to adventure sports, especially WWR, we knew absolutely nothing about the ideal conditions suited for WWR. We were to learn it , the hard way!!!

FORWARD HARD!! yelled the navigator, as I put my head down and started to paddle, getting in sync with two others on the port side. We reached our first rapid. It wasn’t too rough, and we cruised through it with ease, what a rush that was!! We were screaming and cheering and basking in the glory of our mini triumph. All the butterflies in my stomach started to settle, “This is awesome!!” I thought to myself as we got through rapid number two.

Four rafts pushed off in sequence when we started this adventure, and as we were reaching the second rapid, I was on the third raft. As we came out of the second rapid, and I lifted my head to look around and continue our cheering, I saw bright yellow and orange helmets floating on the river and a capsized raft. At this point everything was still fun for us, as HiTi started pointing at helmets and saying, “there’s one!”, “there’s another”. I heard the team behind us cheer as they crossed the second rapid. The water got a bit rough and we had to put our heads down and paddle, trying to rescue those who were in the water. We then realized that the raft behind us had also capsized. The first raft was trying to pick up people who were orphaned by the second raft, while we changed our focus to saving those who were in the fourth raft.

Things went from bad to worse withing a matter of seconds, three of our friends, NiGo, ChaWa and UmLi got caught in a strong rapid and were swept away. Raft number one was already over crowded with people from raft two. Luckily most of the guys and girls on raft four were swept towards the bank, where they were able to grab on to branches and save themselves.

We raced behind the guys who got swept away. The instructor was screaming out instructions, we hit rough rapids, and came oh-so close to capsizing ourselves a few times. Thank our lucky stars we didn’t, because if we did, there was no one to save us. NiGo was the first one we rescued, just before we fished him out of the water, he went under a huge rapid, I thought we lost him, but after about 10 seconds he resurfaced, and we got him into our raft. He didn’t speak a word. He just sat there, curled up in a ball, shivering. We had no time to comfort him, or even ask if he was OK, the navigator was barking out instructions as we paddled after the other two.

“If you want to save them, paddle faster!!!!” the navigator shouted, he knew the situation was bad, the water was too fast, the area coming up was very dangerous, with very rough rapids. We were paddling with all our might, but we were starting to fatigue, having paddled continuously for roughly 10-15 minutes, and traveling close to 4km. Just as we closed in on UmLi and ChaWa, they got caught to some strong under currents and were swept off in two different directions. Luckily ChaWa was swept across towards the bank, where with his very last ounce of energy, he managed to grab onto a branch. UmLi was swept into the center of the river. There was nothing we could do, we were not in a position to grab him, or change course, the navigator jumped in to the water after him as we paddled to the bank where ChaWa had stopped. The rapids were so strong, that it took our instructor less than 10 seconds to travel a distance of about 150m, just as UmLi was swept around a bend, I saw the navigator catch hold of him.

We climbed out of the raft, and on to a rock bed, our ankles in the water, we quickly got  NiGo and ChaWa onto dry land, and talked them down. We waited to see if anyone else, a raft, or a person, came down the river. After about 20 minutes we started to make our way back to the main road. People we met on the way as we trekked through the narrow village path gave us the penance stare .They said we were fools to go rafting in these dangerous conditions.

We got news that everyone had been taken ashore, that everyone was safe. The truck that transported us from the camp to the  starting point picked us up. We went all the way back to the starting point, picking up small groups of people here and there. They had walked up to the road from where they had come ashore. Finally the tension eased when we found UmLi, who had been rescued by a good Samaritan who had heard about some rafter being swept away.

Roughly an hour after the incident, we were all back at camp, everyone accounted for, each one with their own story to tell about their experience, and just being thankful to be alive. It was an emotional time, a time were we built a very strong bond among ourselves. We were not just a group of people who worked together, we were, from that moment on wards, and forever will be, a family. 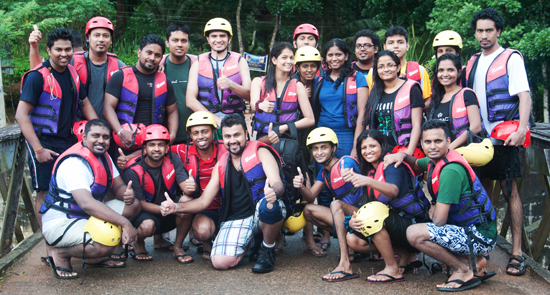 The first river you paddle runs through the rest of your life. It bubbles up in pools and eddies to remind you who you are.
-Lynn Noel