Adam’s peak referred to as “Samanalakanda” (සමනළ කන්ද) is a 2,243 m (7,359 ft) tall mountain located in central Sri Lanka. According to Buddhist belief it contains the sacred footprint or “Sri Paadaya”(ශ්‍රී පාදය) of the Buddha.

We began our journey after lunch on Saturday, 21st February 2015. As we approached Nallathanniya, the village at the foot of the mountain, there was a long line of buses and vans parked on either sides of the road hinting that a large crowd  was visiting Adam’s Peak over the weekend. Our bus was stopped by the police and we were instructed to leave our bus at that point and take the public transport to Nallathanniya (roughly 5km away from that point) as there was heavy traffic. We arrived at the inn we had arranged  dinner around 9 pm.  After freshening up and having dinner, we began the hike to the peak around 11 pm. Our objective was to reach the peak by about 5:30 am on the 22nd to view the sunrise. Judging by the crowd, this was going to be quite a challenge.

The path from Nallathanniya to the Peak is a 5 km route threading through the Adams Peak Wilderness sanctuary, a natural reserve in Sri Lanka. It is said that this forest is sacred as it is the domain of the Buddhist God Saman. It is mentioned in literature that Lord Buddha graced Adam’s Peak upon the invitation of God Saman. One who pays homage to the sacred footprint, should do so with the blessings of the God Saman. Those of strong faith, believe that the journey to the peak, difficult as it is, may become even more difficult if you anger the gods. There are many stories of such incidences told by our elders.

The pilgrims who take this sacred journey perform various rituals along the way. One such ritual is taking a bath in the Seetha Gangula’, a branch of the Kelani river. Roughly translated it means, “Cool River” or “Cold River”. The water is quite cold even on the hottest of days and it is very refreshing to have a bath or even just freshen up. The stories say that the Lord Buddha also bathed in the river as he ascended the peak. Another ritual is to tie a thread at the “Indikatu Paana”, also known as “Geththam Pana”. It is said that during Lord Buddha’s ascent to the peak, his monastic robe was entangled on a twig and a thread was dragged along as he walked. Others say that pilgrims from ancient times, dragged along a thread, so that they could find their way back, similar to the bread crumb trail popularized by the German fairy tale of Hansel and Gretel, recorded by the Brothers Grimm. 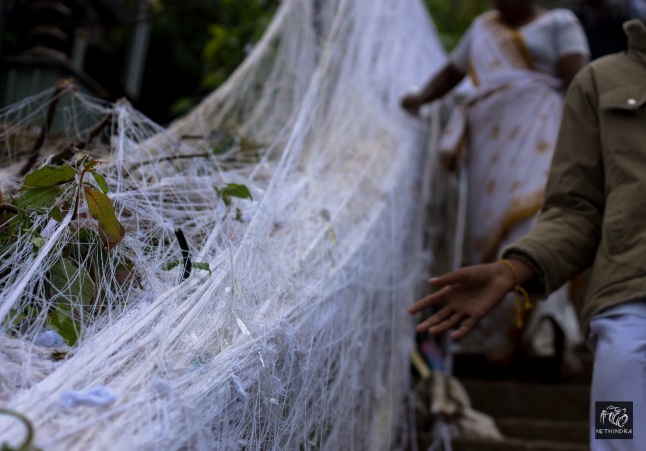 As predicted we encounter a large crowd, and we were only able to make it to the Geththam Pana, about 1 km below the peak, at sunrise. It took us more than 12 hours (normally it takes about 5-6 hours) to make it to the peak.

It was quite frustrating because the delay was caused by the indiscipline of some so called pilgrims. These people break queues and take short cuts through forest areas. The narrow paths are meant for 2 queues going up, and 2 queues going down, but, there were times when there were 4 queues going up. This meant that there was no room for those who had already worshiped the peak to come down. It was very sad to see some elderly pilgrims having to stand for more than 20 minutes in one place, because of the selfish acts of others.

This was the first time out of the five occasions I visited Adam’s Peak that I encountered such a large crowd of people, and had to endure such difficulties to reach the peak. But in the end it was all worth it. It is my personal belief that overcoming such adversity and making it to the very end is the true test of faith.

The way is not in the sky. The way is in the heart.