The Doha City Tour is a complementary tour package provided to all passengers who fly with Qatar Airways and have a transit of 8 hours or more at the Hamad International Airport. The tour is free and you don’t need to have visa to enter Qatar. Bear in mind that the tour departure times are fixed; this means that even though you have a transit time of 8 hours, eligibility for the tour depends on the departure time of your next flight.

Home of Qatar Airways, the Hamad International Airport (HIA),is gigantic when compared with the Bandaranayaka International Airport and boasts of handling a record breaking 37.3 million Passengers and 245,800 landings and take-offs during the year 2016.The iconic curved roof of the airport represents ocean waves and sand dunes establishing the airport as Qatar’s gateway to the world. The contemporary design that etches a lasting imprint on guests pay homage to Qatar’s rich cultural heritage while mirroring the nation’s progressive growth. HIA launched dual passenger trains within the terminal to reduce passenger travel time through the terminal and adding to the attractiveness of the interior. In order to further improve and facilitate faster passenger movement within the terminal HIA has invested in various technological initiatives such as the iBeacon enabled mobile app and the launch of the Smart Airport Program that integrates the latest of cutting edge technology. Guest amenities include two hotels, an array of restaurants, abundant duty free shopping as well as a spa and health club.

A noteworthy landmark inside HIA is the giant bronze statue of a teddy bear with its head in a lamp on display at the grand foyer of the airport’s duty-free shopping hall. The statue, that weighs about 20 tons and stands at 7 meters in height, was previously displayed at the Seagram Building‘s plaza in New York City until it was purchased by a member of the Qatari royal family at a Christie’s auction for USD 6.8 million.

Once you register yourself for the City Tour, you must gather with the rest of the tour party in the vicinity of the Tour Desk. The airport staff will then escort you from the tour desk to the tour bus via immigration.The Tour Guide will start off with a quick introduction and then you’re on your way to the City of Doha.

Since we arrived in Doha at 7:00 AM, we were able to join the 1st Tour of the day. Despite the fact that it was somewhat early in the morning, it was very warm outside. They sky was a beautify blue, unblemished, not a cloud in sight as the Sun ruthlessly beat down on us.

As the bus drove along the highway towards the first location on the tour, the Guide relayed bits of information about Qatar and its people. In case you didn’t know, foreigners, many living in Qatar for employment, account for roughly 85% of the Qatari population. During my visit to Doha, in October 2017, there were many construction projects in progress. As per the Guides narration, many of these projects are in preparation for the 2022 FIFA World Cup which is to be hosted by Qatar. If you look closely, you will notice that the trunks of the street lamps are covered in Arabic writing. According to the Guide, the National Anthem of Qatar is written on each of these street lamps. The buildings and structures you see woven into the cityscape are by themselves architectural masterpieces. The National Museum of Qatar, designed by Jean Nouvel, is one such example where the building, like a desert rose, appears to grow out of the ground and be one with it. The Doha Tower, an iconic missile shaped building, and the Torch Doha, home to a 360° revolving restaurant are amongst many amazingly designed skyscrapers that add to the variety of the Doha Cityscape. 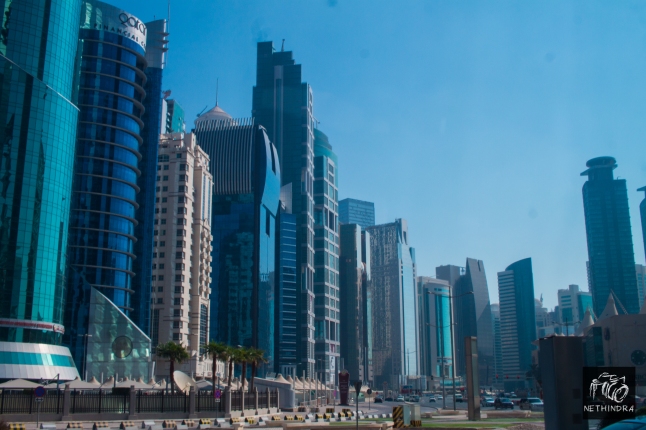 The first stop on the tour was in the vicinity of the Museum of Islamic Art. The road that leads to this viewpoint starts from the Oyster Fountain on the Doha Corniche, and on either side of this road you can see traditional Dhow boats used for pearl fishing. The viewpoint gives you access to a lovely view of the Doha Skyline during the 10 minutes that the tour spends in this location. The architectural design of the Museum has made it an iconic feature in the Doha landscape. Standing by itself on the waterfront, the design of the building is inspired by ancient Islamic architecture, notably the Ibn Tulun Mosque in Cairo. From a distance, the cream colored limestone building looks like a woman wearing a Burqa, the traditional Islamic outer garment which covers the body and the face, leaving only the eyes open.

We were back on the bus, heading to the second location; The Pearl.

The Pearl Qatar is a pearl-shaped artificial island, home to luxury apartments, hotels, commercial buildings and high end shops. The bus stops here for about 15-20 minutes. There is nothing much to see here, other than the Pear which is beautifully landscaped and worth having a look. It was very warm and extremely sunny when we got off the bus, but from the photographs I have seen, the pear looks amazing during the evening and night when the lights are turned on. On the other hand, you can definitely do some window shopping at the Ferrari showroom or the Rolls-Royce showroom across the street. After a short walk around the vicinity of the drop off point, we were back on the bus on our way to location three, Souq Waqif.

Souq Waqif which means standing market is famous for selling tradition garments, spices, handicrafts, and souvenirs. The longest stop on the city tour, the Souq is the ideal place to pick up a souvenir from your visit to Doha. All shops accept US dollars, but it’s best to have an idea of the foreign exchange rate beforehand. You will also find an array of restaurants and Shisha lounges. The Souq has the characteristic maze like design seen in most Middle-Eastern markets, so pay attention to where you are going and don’t get lost in the interconnecting streets! The buildings are mostly single-storied, another characteristic of traditional Qatari architecture. We didn’t spend too much time walking around; instead we located a restaurant that served what looked like traditional Shwarma and enjoyed a hearty breakfast. The group then gathered at the rendezvous point and walked towards the Spiral Mosque, yet another architectural work of art.One of the most famous landmarks in Doha mosque has a unique minaret design and was once the largest in the country.

“Art should be an oasis: a place or refuge from the hardness of life.”
– Fernando Botero