The first time I attempted Cosplay was at Lanka ComicCon 2017 where I portrayed the Joker from the classic DC comic “Batman: The Killing Joke”. Despite her reluctance, I managed to get my wife to Cosplay Barbra Gordon to bring to life an iconic scene depicted in the Comic. 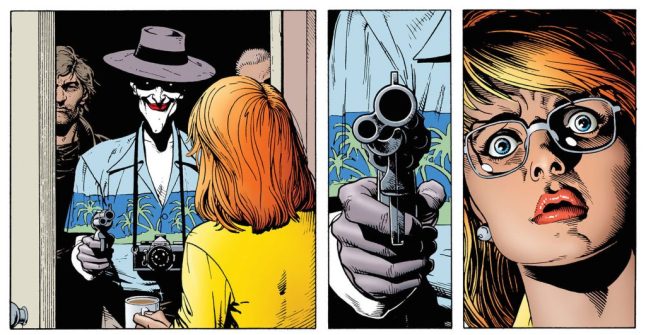 The scene where the Joker shoots Barbara Gordon in the stomach, paralyzing her, and kidnaps her father, Commissioner James Gordon.

However, my first Cosplay was a botch job. There was no planning or preparation. I bought the make-up, stockings, Gun and Hat the day before ComicCon 2017. I decided that this year I would put more effort into my Cosplay. This is my journey to ComicCon 2018, where I Cosplayed “The Shredder” from the classic 90’s cartoon Teenage Mutant Ninja Turtles.

According to Wikipedia, Cosplay is a performance art in which participants called Cosplayers wear self-made costumes and fashion accessories to represent a specific character. The word Cosplay, coined in Japan in 1984, is a portmanteau of the words costume play. Cosplayers often interact to create a subculture, and a broader use of the term “Cosplay” applies to any costumed role-playing in venues apart from the stage. Any entity that lends itself to dramatic interpretation may be taken up as a subject and it is not unusual to see genders switched. Favorite sources include anime, cartoons, comic books, manga, live-action films, television series, and video games.

Cosplay is fairly new to Sri Lanka. Since the inception of Lanka ComicCon, Cosplay has grown exponentially with a huge community of Cosplayers coming together at the event. The level of skill and dedication demonstrated by the individuals engaged in Cosplay is phenomenal!

I don’t have a favorite superhero. I’m a huge fan of the Teenage Mutant Ninja Turtles since I grew up watching the classic cartoon and movies. Apart from those lean green fighting machines, my favorite character is the Master Chief, Spartan 117 from the iconic Halo series. But, my all-time favorite character, is a super villain; The Joker!

The transition into the dark side happened after watching the extraordinary performance of the late Heath Ledger in the movie “Batman – The Dark Knight”. I honestly feel that it was Heath Ledger who really understood the inner workings of the mind of a psychopath who is as complicated and unhinged as The Joker.

When brainstorming for ideas for this year’s Cosplay, my first thought was to build the Mjolnir Armor, a MA3 Assault Rifle and M6B Handgun (Pistol) wielded by Master Chief in the game Halo CE. It didn’t take me long to realized that I lack the time, equipment and skills required to put together such an intricate armor. This is where I came up with plan B.

When searching for Helmet designs for the Mjolnir Armor I came across a design for the helmet worn by The Shredder in the first TMNT movie released in 1990. The helmet design was straight forward and simple to follow; so it was decided, I was going to Cosplay “The Shredder” at Lanka ComicCon 2018.

Who is The Shredder (Oroku Saki)?

Oroku Saki was born in Japan and was part of the Ninja Foot Clan. The Foot Clan was the enemy Clan of the Hamato Clan. Once, the Hamato Clan attacked the Foot Clan and whipped out almost all of them. Among the survivors was the baby Oroku Saki. The young child was discovered by Hamato Yoshi’s father who took him in and raised him as a brother to Hamato Yoshi.

Oroku Saki was unaware of his true heritage while growing up. As he grew older he became the rival of Hamato Yoshi. Their rivalry soon escalated to a personal level where they both shared a love interest in the same woman, Tang Shen. It was clear that Tang Shen favored Hamato Yoshi, and this turned Oroku Saki’s jealousy into hatred. One day Saki approached Yoshi and insulted him in front of Tang Shen. A fight ensued; Yoshi won, and Saki had to flee and wonder alone.

During this time Saki learned of the past that was concealed by Yoshi’s father. Saki decided to rebuild the Foot Clan and took on the persona known as “The Shredder”. While still carrying a burning hatred for Yoshi, and thinking that he took Tang Shen away from him, The Shredder seeks out Yoshi and attacks him in his own home. Tang Shen is accidentally killed during this fight in which Saki emerged victorious by killing Hamato Yoshi. When the house was burning down, Saki discovered Yoshi’s daughter; he took the infant and left. Saki considered this revenge because he thought that Yoshi took Tang Shen away from him. Saki raised this child as his own and named her Karai; training her and making her part of the Foot Clan.

As time passed by, Saki found the ancient helmet worn by previous leaders of the Foot Clan. It is said that this helmet known as “Kuro Kabuto” which means “Black Helmet” was created by the founder of the Foot Clan, Koga Takuza, about 1500 years ago. The helmet is stronger than steal and was the final piece of the Shredder’s armor.

The Shredder is known to be ruthless, cold and cunning. As a man of pure evil who let his hatred consume himself. Combined with his armor and his mastery of the Martial Arts the shredder is a dangerous enemy!

The Shredder from the classic TMNT Cartoon in the 90’s

As mentioned above, the version of “The Shredder” that I wanted to Cosplay was the one from the classic TMNT cartoon from the 90’s. However, the helmet template that I found online was from the 1st TMNT movie released in 1990. This wasn’t ideal, but I decided to go ahead with the plan, and started working on the components.

I started with the Helmet, because it was the most difficult component to manufacture. I found a Pepakura model of the helmet from therpf.com. This is the link to the particular thread. Pepakura is the software for unfolding a 3D object into printable parts. In this case, it is a 3D model of a helmet; the software allows you to unfold it and print it out to make a 1:1 prop.

I got the Pepakura printed on art-board, and assembled the helmet, blade and mask. However, I decided to use adhesive tape instead of glue to fit the parts together. It also helps to have an extra pair of hands! After all the hard work put into making the individual parts, I somehow managed to mess up when attaching the blade to the helmet! Oh well….

Once the helmet was constructed, I used paper mache to strengthen the structure. Again, I missed the mark on this step. I don’t think the pulp that I prepared up had the proper ration of glue and water. Plus I didn’t expect the art-board to soak up that much water and become soggy. The result was that the helmet went out of shape as it dried up.
Once the helmet was made, I moved on to the rest of the armor. 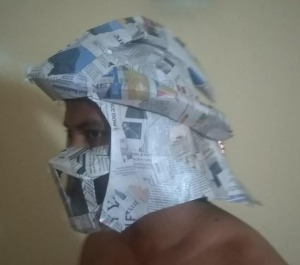 The armor used by The Shredder in the classic TMNT cartoon was quite simple. It consisted of four parts;

Unable to find any templates online, I used my limited artistic ability and made my own. I first looked at tons of pictures of “The Shredder” online. This helped me to get an idea of the shapes and sizes of the different pieces of his armor. Then I measured the length of my forearms, shins etc… and drew some free-hand shapes on cardboard. Next, I cut them out and adjusted the shape by trying them on in front of a mirror. When I was happy with the shapes, I moved on to the claws and spikes. I drew spikes of different sizes, one size for the forearm and shoulder armor, and a slightly bigger size for the shin armor.

The next day I head over to Pettah (AKA Colombo Fort) and found a shop on Prince Street that sold EVA Foam. EVA Foam is a soft, yet durable polymer of Ethylene and Vinyl Acetate commonly used in flooring, but also in sports equipment, crafts, and set design. They have it in various thicknesses to suite your requirement.

I bought an 8 by 4 foot sheet that had a thickness of 2mm. I chose the 2mm sheet because I planned on making each piece of armor using three layers of foam. The reason for that is threefold;

I transferred my armor templates to the EVA foam and cut them out with some help from the Mrs. I first fixed the spikes on to the top layer of the armor and laid it on top of the middle layer. Next, I fitted the straps to the underside of the middle layer, and sandwiched it in with the bottom layer of the armor. I used Multibond a brand of PVA adhesive glue to paste the EVA Foam together. I left the foam to dry for a few days. On and off I would mold the parts to curve them to fit the contours of arms and legs. However, the best way to mold EVA foam is to mold it while using a heat gun to heat the foam. I didn’t have a heat gun, and using a candle didn’t seem very safe; thus, I resorted to using my wife’s hair dryer.

I attached Velcro onto the straps so that I could adjust the lengths of the straps when I wore the armor.

All that was left to do now was to paint the armor and the helmet. This was done using black poster paint mixed with Chemifix glue. My wife, a Kindergarten teacher, mixed the paint and created the perfect shade of grey to apply on the helmet and armor. The painting took longer than expected, and we decided to use two coats of paint. Since we had to leave the paint to dry, it took us roughly 3 days to finish with the painting.

The clothes that “The Shredder” wore in the 90’s cartoon were, again, quite simple. That is one of the reasons why I picked this particular version as my Cosplay in the first place! Yet, that kind of a sewing project is outside my skill set, so I asked my cousin sister if she would be willing to help me with my little project. Luckily there was a mid-week public holiday on the week before Lanka ComicCon18, and Akki was more than happy to help me!

The weekend before going to Akki’s place, I went to “Pamunuwa” a place in Maharagama that is famous for clothing shops. I bought a piece of Grey colored cloth for the top and a Purple colored cloth for the cape. We spent the day at Akki’s place; I showed her photographs of what she needs to sew, and she did an amazing job! After making the cape, we thought it would be easier to sew the cape onto the top and it turned out to be a smart decision because it helped keep the cape in place and was also easy when dressing up and dressing down.

To complete the rest of the attire, I borrowed a pair of black spandex tights from my wife, and a pair of Black Socks. Being Japanese, The Shredder wore a type of outdoor footwear invented in the early 20th century called Jika-tabi (地下足袋, “tabi that contact the ground”). An ingenious accession to practicality, jika-tabi is more reflective of the underlying structure of the human foot. I wasn’t able to get my hands on a pair of Jika-tabi, so I decided to wear black rubber flip-flops with the black socks because it would separate the big toe from the rest of the toes similar to the design of the Jika-tabi. 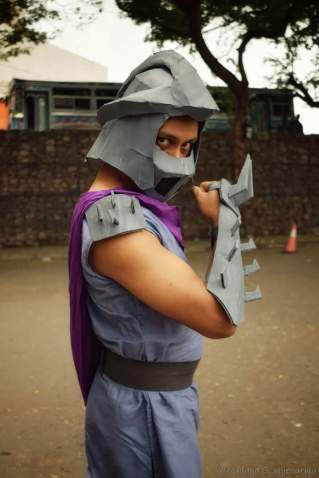 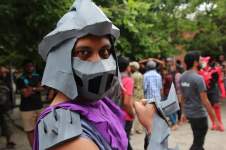 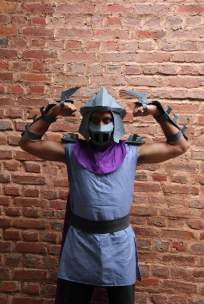