It was King Charles IX, popularly known as the King on the Stallion (Kopparmärra) at Kungsportsplatsen, who decided to build the city of Gothenburg in 1607.  Unfortunately, the city was burnt to the ground by the Danes in 1611. Then in the year 1619, King Gustavus Adolphus rebuilt the city in its current location. A statue of King Gustavus Adolphus, by artist Bengt Erland Fogelberg, has been erected at the Gustaf Adolf Square forever immortalizing the moment that His Highness pointed at the ground and proclaimed “Here, the city shall lie!” 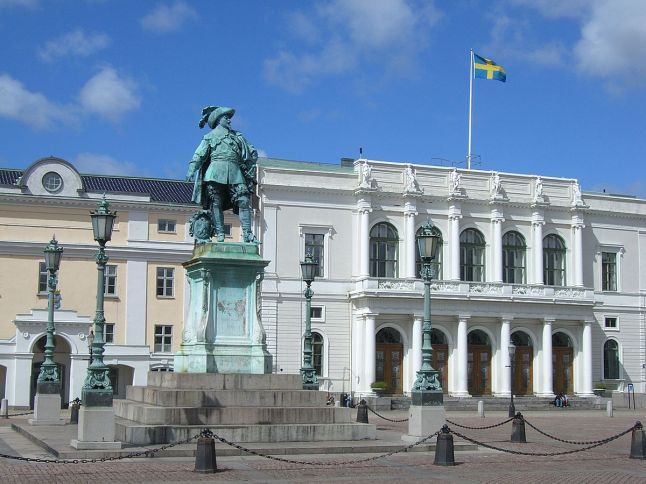 The second day of touristing in Gothenburg, started with me oversleeping! I had made plans the previous night, to visit a few museums. Since most of the museums open at 10:00 AM, I had just about an hour to sync up with my wife over Skype, take a shower and cycle to the Kungsbacka train station to catch the train at 9:40 AM.The sync up with my wife took longer than I expected, so I had to get breakfast on the go!

My first stop for the day was the Universeum. Therefore, instead of taking the train all the way to Gothenburg Central Station, I got down at the penultimate stop -Liseberg station.

If you have a knack for science then the Universeum is definitely a must visit! The Gothenburg Pass gets you free entrance to Universeum, which happens to be the largest science center and museum in the Scandinavian region! The center is made up of 7 floors and was opened to the public in 2001. One of the main attractions at Universeum is the Tropical Rainforest built around a huge 25 meter tall Kapok tree. Built on this tree is a Tree house which you can reach via several suspension bridges. You can hike through the rain forest and observe exotic birds, monkeys, frogs, butterflies and even Sloths.  It is without a doubt an impressive setup, but for someone who is originally from a tropical country it may feel a little dull. 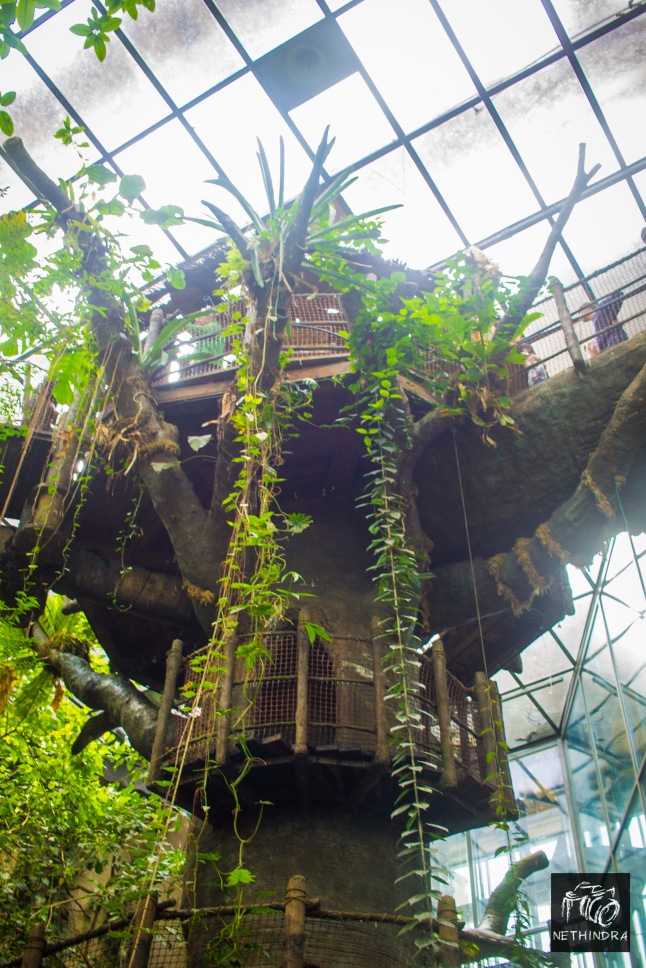 Tree house on the Kapok tree

The Aquarium in Universeum is what impressed me the most! Apparently it holds over three million liters of water, making it one of the largest Aquariums in the world. The North Sea Aquarium allows visitors to view the marine life found in the North Sea and along the Swedish coast through a sixteen meter long, four meter high panorama screen.  The Ocean Aquarium with close to 1.4 million liters of water is the biggest aquarium within the premises. A tunnel takes you through the aquarium, gives you the feeling of walking amongst these beautiful creatures of the deep. You will be able to see Sharks, Rays and large Sawfish dominate the Ocean Aquarium, but, you can also catch a glimpse of characters from the popular kids’ movie “Finding Nemo” residing in the coral reef. 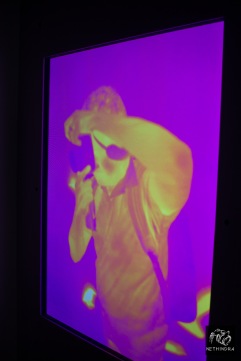 My Heat Signature via the Thermal Camera

The latest addition to Universeum is the “Reptilariet”, where visitors can get up-close and personal with a unique collection of venomous snakes and lizards. I am one who is terrified of snakes! But I must say I did enjoy this exhibit. The habitats built for the reptiles were done beautifully. The educational exhibits where also very nice. One such exhibit was the “How snakes see you in the dark” section. It was a small dark room with a thermal camera that live streams to a large LCD screen. Thus, when you enter the room, you can see your own heat signature, the same way a snake would see you in the dark.There was another exhibit that simulated a snake bite via a small electric shock.  Needless to say, I didn’t go anywhere near that contraption! After quite an enjoyable experience at the Universeum, I was off to the next stop – the floating maritime museum on the GötaÄlv.

Maritiman is the world’s biggest floating museum. The museum consists of 19 vessels that are moored and ready for visitors. We passed the floating museum whilst on the Paddan tour the previous day, and I was very excited to be there! Gothenburg was famous for its harbor and shipyard, and it is a fitting tribute to the city’s legacy to have such a unique museum. The best part is that you can climb aboard most of the ships that are on display. The most memorable experience for me was the opportunity to climb on board the Destroyer Småland and the Submarine Nordkaparen. The Småland is a Halland-class destroyer ship built for the Swedish Navy in the 1950s, while the Nordkaparen is a Draken class (Dragon) submarine built for the Swedish Navy during the early 1960s and kept in service until the late 1980s. The differences on board the two vessels were very contrasting; the sub had close quarters within a confined space, while the destroyer had much more open space. Similarly, the bridge of the destroyer had an expansive view while the sub was equipped with a periscope, the only contact with the outside world.

The Destroyer and the Submarine

My next destination was far away from the city. I had to take a bus from Maritiman to Hjalmar Brantingsgatan; a center for tram and bus traffic in southeastern Hisingen. And from there I had to take another bus to Granhäll. Buses to Granhäll departed every hour, and I just missed a bus because I couldn’t find the correct terminal when I got to Hj. Brantingsgatan. This meant that I had some time to kill and decided to walk around the town and grab some lunch from the local Subway. I got on the next bus and set off into the countryside. 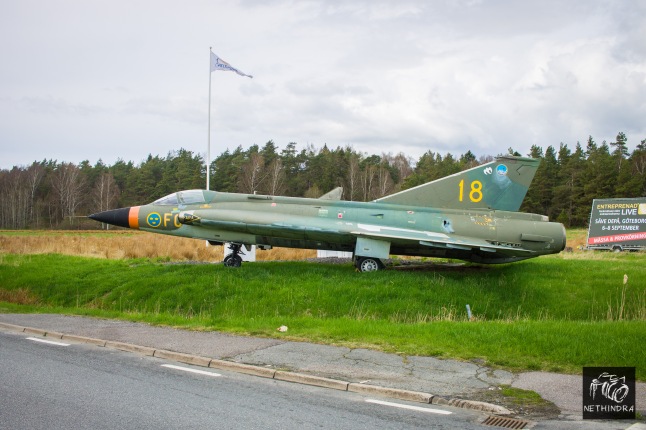 SAAB AJSH 37 Viggen pointing in the direction of the Aeroseum

I was heading to the Aeroseum an aviation museum set up inside a declassified Swedish Air Force bunker. I had to walk another kilometer after getting off the bus at Granhäll. The country side was deserted, not a soul to be seen and only the sound of the wind brushing through the trees interrupted only by the drone of a  Cessna circling the nearby Gothenburg City Airport. To be honest, I was pensive that I was on the wrong path; despite the sign boards, and the fact that I was on the ONLY road available. The reason being that I was looking for a building or a large hanger, but, there was no such structure as far as the eye could see, and I was walking towards what looked like a forest. The lady at the gate told me to keep on the path.

I soon found out that the aircrafts were stored in an underground bunker carved in to a rock. The hanger is roughly 20 meters below the surface. Built in 1955 for the then Göta Flygflottilj (F9 – No. 9 Wing) that occupied Säve Airfield. The Aeroseum is part of the Swedish Military Heritage network that falls under the umbrella of the National Swedish Museums of Military History. Presented within the reinforced walls of the underground bunker, is the history and development of aviation. Everything from Icarus to the modern aircraft, helicopters, and other flying machines are lined up and put on display. You will even find some ground vehicles specialized in traversing across snow. 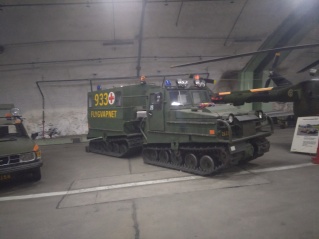 The Aeroseum is an activity center focused on aviation that allows visitors to construct or restore old aircrafts and helicopters.  You can also experience flying some of these aircraft via the flight simulator or even go as far as actually flying some of them.